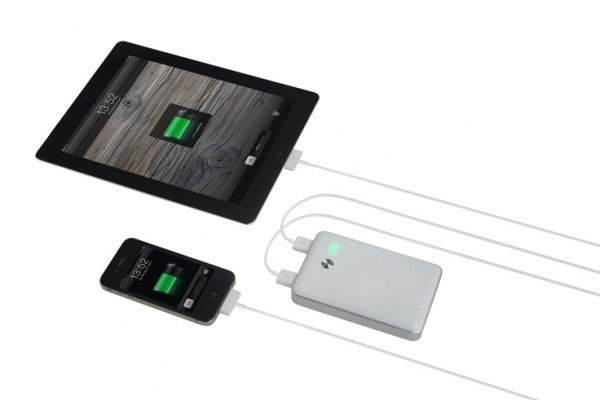 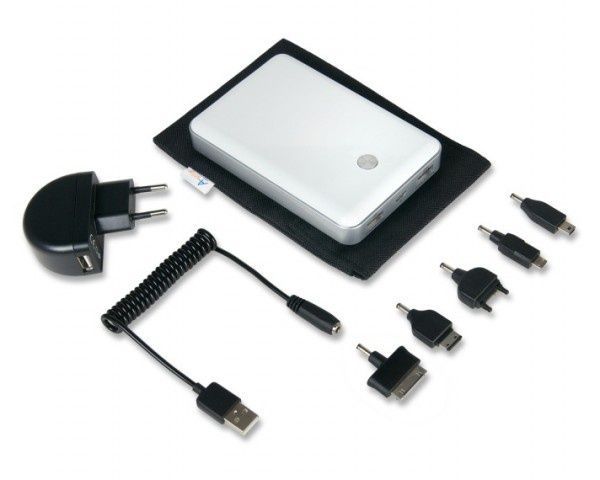 A-Solar offer a series of products under the XTORM banner, it's a line of portable battery packs. And this market is fierce with choice and the product I have, the AL-360 Power Bank 11.000mAh is aimed at the high end. In fact it's the highest specced battery pack in the XTORM series.

The exterior is very Apple like in design terms. Coated in white glossy plastic with a silver trim running around the middle, simulating aluminium. The style is very admirable and doesn't look out of place if you need to obtain some extra juice from it in public. In size terms, it's a little longer and taller than it's competitors but that's justified from the amount of energy stored within. It's also rather heavy, weighing just under 300g.

Two USB ports sit along the front, the right port slightly better than the left for charging purposes because it has a higher amp allowance. This can't be taken advantage of by all devices but the iPod touch, iPhone and iPad make use of it. The left is recommend for general smartphones, tablets and other USB devices that can charge through USB. I can verify that the right USB charges exceedingly quicker than the left, with the iPhone 5 and iPad. It's identical to charging via a wall outlet. Usually battery packs have one generic speed output.

So how much charge does the XTORM AL-360 Power Bank hold? In iPhone 5 charging terms it can fully charge the device four and half times. This is very impressive and many devices such as portable audio players will sip the reserves of the battery pack in comparison to the iPhone. Not to mention that you can charge say a Google Nexus 7 alongside an iPhone 5 simultaneously. The claim on the box is up to 50 hours of operating time and from my tests it's very close, the combined iPhone charges delivered around 45 hours of usage. This is an ideal sort of solution to take with you for a weekend of camping. You could charge your tablet, phone and other devices and probably still have some juice left over.

I've been using the charging solution for the past two and bit weeks. It's held a solid charge over this period and I only charged the battery within the XTORM via the included wall outlet during the night, so I don't know the exact period of time it takes to gain a full charge but it's definitely less than six hours. To obtain a reading of the charge level, simply press the one and only silver button sitting on top. A reading in the form of green bars will appear for around eight seconds, four bars is the highest level of charge.

In the box a carry pouch is supplied which is a nice and useful. But my favourite added inclusion is the USB cable. A-solar have included a USB cable that can be plugged into the Power Bank which allows for interchangeable tips. Several tips are included in the box with, Samsung Tab, Samsung Generic, Sony Ericsson, Mini USB and Micro USB. This opens the Power Bank up to a huge array of compatible devices.