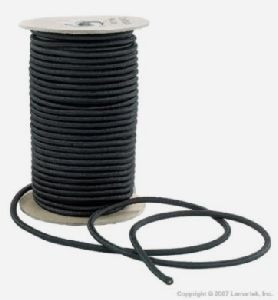 Shock cord, also known as bungee cord, is an elastic cord composed of one or more elastic strands forming a core, usually covered in a woven cotton or polypropylene sheath. The sheath does not materially extend elastically, but it is braided with its strands spiraling around the core so that a longitudinal pull causes it to squeeze the core, transmitting the core's elastic compression to the longitudinal extension of the sheath and cord.

Bungee cords were originally used in parachuting to assist in opening the old-style parachute container after the ripcord was pulled.

Today, bungee cords are most often used to secure objects without tying knots and to absorb shock.