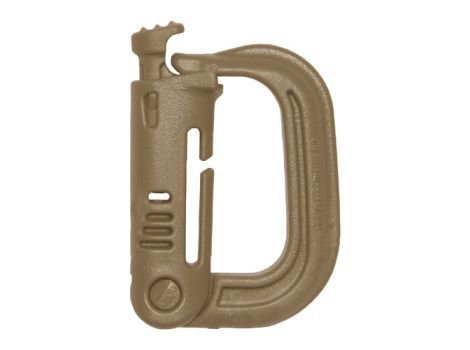 The Fastex-Grimloc™ karabiner can be attached to any 1 inch wide strap. It replaces metal karabiners which were used up to present to attach lanyards, weapons or other equipment to backpacks. In the open position, the clamp has a slight latching position. As a result, it can carry weight but will break off when overly strained in order to avoid injuries caused by getting caught up at the open hook. The trigger that unlocks the karabiner can easily be operated even when carrying gloves. The case has openings where dirt and water can escape without blocking the mechanism. The GrimlocTM Carabiner is part of the official equipment of the US Army and the Marine Corps. GRIMLOCTM is made of a synthetic material and can only be used for attaching equipment. It must never be used to secure or recover human beings!